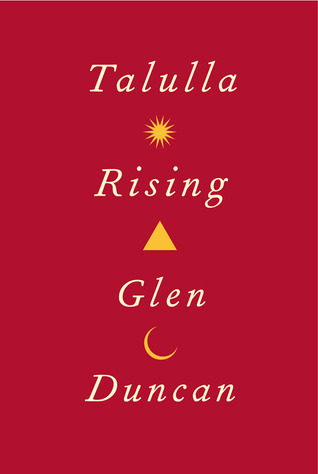 When I change, I change fast. The moon drags the whatever-it-is up from the earth, and it goes through me with crazy wriggling impatience . . . I’m twisted, torn, churned, throttled—then rushed through a blind chicane into ludicrous power . . . A heel settles. A last canine hurries through. A shoulder blade pops. The woman is a werewolf.  (Book description from Goodreads)

Warning is post contains spoilers if you have not read The Last Werewolf.

Tallula Rising is the sequel to The Last Werewolf.  As the title indicates this book focuses on Talulla, who was introduced near the end of The Last Werewolf.  Jake Marlow is dead, killed by WCOP (World Organization for the Control of Occult Phenomena) the same people who are hunting her.  They are going to have to stand in line because the vampires are after her too.  Sound cliche?  Sound like every other werewolf/vampire book you have read?  While the theme may sound familiar, the execution is far from it.  Duncan creates a world where the classic monsters are real but does so in a way that kept me turning the pages.  Talulla is a monster, something she freely admits, but here is where Duncan deviates from the typical self loathing monster trope.  Talulla accepts what she is.  While this does not mean that she is not remorseful about killing and feeding on humans once a month, she understands and accepts it.  I really liked this aspect of the book.  Duncan created a monster that I wanted to befriend knowing all the while she would probably kill me.  Having  monsters that were not killing for the sake of killing and at the same not wallowing in self-pity at their monstrous appetites made room for an engaging story with very interesting characters.

The premise is straightforward, Talulla is pregnant with Jake Marlow’s child and moments after the birth of her son he is kidnapped (not going to give any spoilers here but another unexpected twist occurs as well) by vampires to be used a ritual to raise the oldest living vampire to power.  At first blush this sounded like the plot of the next Blade movie, but it was the characters that really did it for me.  I was so focused on what Talulla and company were thinking and feeling that the whole “vampire ritual” theme took a backseat.

I liked the way the story unfolded, Talulla struggling with the loss of her child and wondering what kind of mother a werewolf would make, legends of the oldest living vampire, Remshi, and then there was the constant pull of the monster inside her.  I will say that this book is rather graphic and not for the squeamish.  There are graphic depictions of werewolves killing and having sex (occasionally at the same time) but Duncan does it in a way that works.  The sex and violence, both a prominent occurrence in the book, doesn’t get in the way of the overall story.

I really enjoyed Tallula Rising and am looking forward to the third book in the series, By Blood We Live.

I can’t tell you how excited I am about Peter V. Brett’s latest book in The Demon Cycle series, The Skull Throne.  I got even more excited when I saw the US cover.

This, ladies and gentlemen, this is pure awesome.

As if that was not enough here is a sample of the first chapter. I am not sure of the exact release date but I’ll be biting my nails until it gets here.

For those of you that have not read this series (seriously, if you haven’t you really should), here the first three books. (Hmmm, I think I might just have time for a re-read myself.)

This should keep you busy until The Skull Throne is out.

I have been away from this blog for several months and before that my postings were sporadic.  I have missed what little blogging I did and aim to do more in the future.  Things will change a bit.  This blog will continue to be about what I love most, books, but there will the occasional rambling post about odds and ends, maybe even a review of a movie or two.  In any event, I am committing myself to keeping this site current with what I am reading, what I want to read, and other random bookish “stuff”.

So, with that out of the way, what are you guys reading?