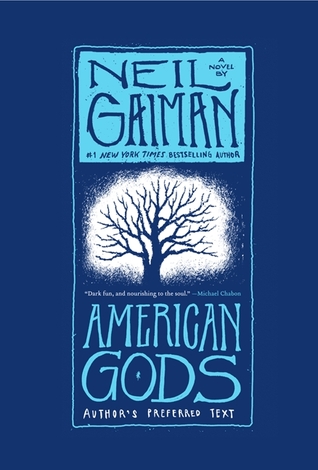 Locked behind bars for three years, Shadow did his time, quietly waiting for the magic day when he could return to Eagle Point, Indiana. A man no longer scared of what tomorrow might bring, all he wanted was to be with Laura, the wife he deeply loved, and start a new life.

But just days before his release, Laura and Shadow’s best friend are killed in an accident. With his life in pieces and nothing to keep him tethered, Shadow accepts a job from a beguiling stranger he meets on the way home, an enigmatic man who calls himself Mr. Wednesday. A trickster and a rogue, Wednesday seems to know more about Shadow than Shadow does himself.

Life as Wednesday’s bodyguard, driver, and errand boy is far more interesting and dangerous than Shadow ever imagined—it is a job that takes him on a dark and strange road trip and introduces him to a host of eccentric characters whose fates are mysteriously intertwined with his own. (Book description from Goodreads).

I want to begin by saying that this is not a review.  There is nothing that I can add to what has been said by others who can articulate their thoughts much better than I.  I  do feel though that this is the best book Gaiman has ever written.  (While I think it is the best that he has ever written my favorite will always be Stardust.  I have a love for fairy tales, but that is a post for another time.)

“Religions are, by definition, metaphors, after all: God is a dream, a hope, a woman, an ironist, a father, a city, a house of many rooms, a watchmaker who left his prize chronometer in the desert, someone who loves you – even, perhaps, against all evidence a celestial being whose only interest is to make sure your football team, army, business, or marriage thrives, prospers, and triumphs over all opposition.”
“Religions are places to stand and look and act, vantage points from which to view this world.”

Gaiman’s books always leave me with a feeling of melancholy, as if, for a brief moment the veil has been lifted and I see the inner workings of the world around.  I am forever changed.  I love this feeling.