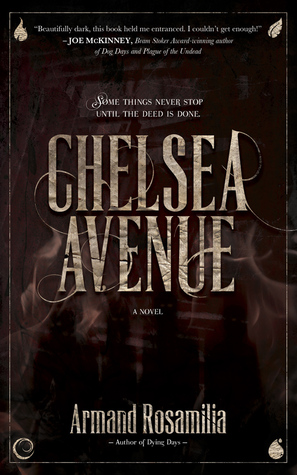 And it isn’t over.

The entity responsible for killing Manny’s family and wreaking devastation in the small seaside community has reappeared. Again. As it has every year since. And is growing in power.

Every July 8th it returns, as survivors of the fires, including Manny, are mysteriously led back to the now-vacant seaside lot on Chelsea Avenue, where the entity intends to finish what it started in 1987 once and for all. (Book description from Goodreads.)

If you had asked me two years  ago if I were a horror fan I would have probably told you no, but over the course of those two years I have been reading more and more horror fiction.  When I had to the opportunity to review a new horror novel from Ragnarok Publications, purveyor of all things dark and fantastic, I jumped at the chance.  I was certainly not disappointed.

Manny Santiago lost his parents on July 8th, 1987, his birthday,  in a fire that destroyed his parents club, Murphy’s Law, on Chelsea Avenue. The fire claimed many lives and the town of  Long Branch is never the same.  The survivors of the fire are not safe as they have been “marked” and return to the site each year on the anniversary of the fire only to meet their doom.

Armand Rosamilia weaves a dark, and horrific tale.  I enjoyed the way the book was written, each chapter representing a year and set on the July 8th, the date of the fire.  After a few chapters the hook was really set and each subsequent chapter pulled me further and further into the story. Watching Manny’s slow decline year by year filled me with dread, as much so as the terrifying entity that was drawing people to their death each year. Rosamilia captures the essence of what a true horror story is to me, ancient and evil forces are at work and there is nothing that can be done to stop it.  That feeling of helplessness is what really scares me and that feeling is prevalent throughout the entire book.  The reader is inexorably pulled along with Manny and the survivors of that fateful night to a horrific climax.

I really enjoyed Chelsea Avenue and Rosamilia brings the landscape to life.  I could smell the salty air and the stink of stagnant water.  I would visualize the desolate ruin of the strip of land where Murphy’s Law once stood.  These wonderful visual effects added extra punch to the story and held me fast, turning page after page late into the night.  The icing on the cake was the amazing cover art by the talented Shawn King.  I highly recommend this book to readers who enjoy a good horror story.

I received a copy of this book from the publisher, Ragnarok Publications, in return for an honest review.

I can’t tell you how excited I am about Peter V. Brett’s latest book in The Demon Cycle series, The Skull Throne.  I got even more excited when I saw the US cover.

This, ladies and gentlemen, this is pure awesome.

As if that was not enough here is a sample of the first chapter. I am not sure of the exact release date but I’ll be biting my nails until it gets here.

For those of you that have not read this series (seriously, if you haven’t you really should), here the first three books. (Hmmm, I think I might just have time for a re-read myself.)

This should keep you busy until The Skull Throne is out.

I have been away from this blog for several months and before that my postings were sporadic.  I have missed what little blogging I did and aim to do more in the future.  Things will change a bit.  This blog will continue to be about what I love most, books, but there will the occasional rambling post about odds and ends, maybe even a review of a movie or two.  In any event, I am committing myself to keeping this site current with what I am reading, what I want to read, and other random bookish “stuff”.

So, with that out of the way, what are you guys reading?

I have been granted the wonderful opportunity to do a couple of reviews for the esteemed  Civilian Reader.  This is my first stab at guest reviewing and I am excited and more than a little nervous as the Civilian Reader has an outstanding reputation in the blogsphere.  I will be reviewing The Spirit War by Rachael Aaron, The Mongoliad by Neal Stephenson, Erik Bear, and friends, and The Dirty Streets of Heaven by Tad Williams.

Of the three I am most looking forward to The Dirty Streets of Heaven as I am a big Tad Williams fan, but I also can’t turn away from a good thief’s tale either, so I am looking forward to digging into these books.  Has anyone read any of them?  If so, care to offer an opinion?

Today is National Buy a Book Day.  The rules are simple:

I discovered this on the awesome book review site Grasping for the Wind.  Everyone go out and support and author or even better authors and buy some books.  Turn off the TV tonight and read a book!

This is is my inaugural blog post I thought I would explain why I like to review books.  I have always been passionate about reading, in fact I can’t remember a time when I did not have a book in my hands.  I read every spare minute I have, at home, waiting on something to print at the office, in line at the grocery store, at a stop light, well you get the picture.  I am not the most social of creatures but you put me in front of a complete stranger to talk about books and you can’t shut me up.  When I am browsing at my local Barnes and Noble and see someone pick up a book I have read I can’t help but comment on it, or say “if you liked that one, have you tried this one” and before you know it a small group has gathered and we are talking books.  I love it, and I get jazzed every time I turn someone on to a good book.

That brings me to the purpose of this blog.  I want to take my passion for books and bring it to this small corner of the blogsphere.  I will publish reviews on what I am reading with the hopes of helping fellow book lovers find the next great read.  That is my passion, sharing the gift of great books.  I always give books as gifts and hopefully this blog will serve as a way to give back to the authors as they have given to us, a way to share their works.

What kinds of books do I like to read?  I like to read all kinds, but my true love is fantasy. Evil wizards, fearsome dragons, valiant warriors, and most of all the anti-hero, the very thought makes me tingle with excitement.  I have been know to pop a 5 hour Energy shot at 9pm on a weeknight just to finish a book, unwilling to sleep until I know the ending.  Now that is devotion people.  I love shared world fiction, my favorite being Wizards of the Coast’s Forgotten Realms.  I have been reading them for the last 20 years and as long as they keep publishing them I will continue reading them, each and everyone.  Many of my favorite authors write for them, Paul S. Kemp, R.A. Salvatore, Elaine Cunningham, and Erik Scott deBie, to name a few.

What can you expect from this blog?  Well first and formost, lots of book reviews, discussion about reading in general, and eBooks, a topic I am particularly fond of.  I have a goal of reading 100 books this year and while I am a little behind schedule (currently on book 29) I plan on blogging about each book I read.